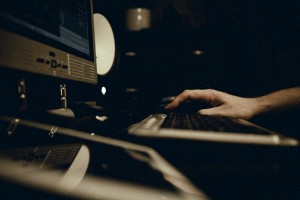 The new trend in mastering is to work on the individual tracks that compose a mix rather than on the mix itself. It is indeed becoming frequent that clients submit OMF files rather than a down-mix of the actual songs, giving the sound engineer who is in charge with mastering the album a greater control and a more precise approach to his work. In other words, Mixing and Mastering are somehow getting a step closer, and I find it all together quite interesting.

Mastering is the final step of the production of a track / album. It consists in giving a coherent sound to the track, on its own and in relation to the other tracks of the album. Mastering is making sure that there is no artefacts, that the overall quality of the music piece is perfect and pleasing to the ear. There is many steps involved in order to produce a good master, ranging from EQing, compressing, balancing, phasing, playing with loudness and peaks as well as, amongst others, arranging the depth of a mix by adding, per example, some reverb.

The following examples will let you understand better than any explanation how a good mix should sound.

For this track I actually received an unmixed OMF file and had the opportunity to add some effects. Here is the result:

Same here, I recorded this song in New-York when I was visiting a friend of mine. We had just a demo really and then I came back home, kept the original recording and added to it and got to this result: